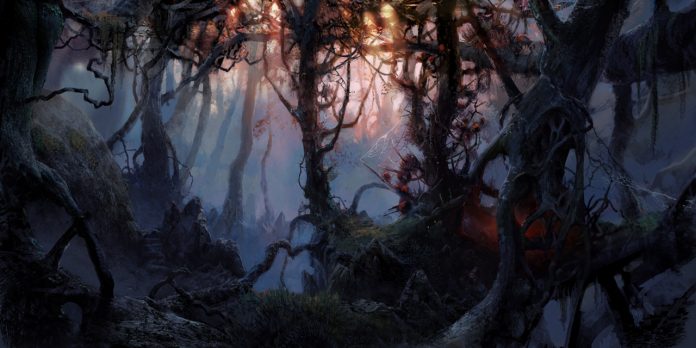 The Johnsons wanted to do something extra special for their gaggle of happy kids this Easter. As spring winds into full swing and the children have been so exceptionally good, they deserved a magical experience of searching for their beautifully painted eggs. They knew that their little ones were captivated by fairy tales and Disney movies where delightful princesses overcome all odds to save their land or rescue their people from villainous forces. So they got to hunting through the land for an ancient forest to find a place where their kids could experience some real magic.

Unfortunately, the naive Johnsons were wholly unfamiliar with the dark and gruesome truth that lies behind the inspiring narratives of modern fairy tales. In many cases, the modern whitewashed films are based on collected stories by the brothers Jacob and Wilhelm Grimm in the early 1800’s. These brothers were determined to maintain the German oral tradition by collecting stories of true and often brutal events that had befallen central Europeans. In order to sell their books, however, it proved expedient to introduce lighter and more palatable changes.

As a result, much of the barbarism of early European folklore remains understood to a dwindling few academics and scholars. These students of the true past that still blinks red eyes in the forgotten places of the world lock their doors at night and keep their stoop lights on with good reason. They know that the Easter bunny is actually a 16-legged extradimensional spider that eats dreams.

The portrait of American innocence that the Johnson family represented was about to get a crash course in history.

One might think that when you happen upon a well tended labyrinth like the S Town hedge maze in the middle of a dark and foreboding Bavarian forest, you might rightly imagine that you have taken a wrong turn or two. Not so for the pioneering and totally clueless egg hiders hired by the Johnson parents off of Craigslist. Writing off the echoing banshee cries that shrieked the names of their lost loves as old trees creaking, they placed a few eggs in the maze.

The egg hiders next encountered what they later described as “a group of eccentric homeless men” who directed them to leave with all due haste before night fell and the great beast awakened. Dismissing these cautions as drunken ravings, the egg hiders attempted to give some spare change to the men who did not respond favorably to contact with silver. The egg hiders grumbled about just being stingy with their pocket change next time they meet some weirdos.

When they attempted to return to the relative safety of their camp, they found that their trail of Doritos® had been messily devoured. Yawning and confused, they decided to follow the convenient neon signs directing them to a welcoming gingerbread bed-and-breakfast. At this point, the Johnsons lost all track of what came of the hired egg hiders. They are missing and presumed on a drug bender in Arizona.

This Easter Goes to 11

After clapping themselves on the back over not having to pay their egg hiders, the Johnson parents packed their children into the station wagon and shuttled off to the forest’s edge. While the very nice villagers from the local Bavarian hamlet waved their arms and attempted to halt them, none of the Johnsons spoke a lick of German. They commented how friendly these rural Europeans seemed, and agreed among themselves to return to the local gift shop after their fun outing.

There would be no fun return to the gift shop.

The youngest daughter, Veruca, hugged her stuffed unicorn to herself and adjusted her shiny plastic tiara. Confident that she was the prettiest princess in all the car, she smiled smugly at her older sister Morgana. Morgana stinks like a fart, she thought.

They parked at the edge of the wood, then moved the car several hundred meters away because the roots of the trees kept trying to drag the vehicle into the cold earth. Picnic baskets in hand, they traipsed to their doom while whistling a song from Frozen.

Apologies to Our Readers

We have learned that the details of what follows were unacceptable for publication, as some of our test audience began vomiting while others had their hair turn shock white after learning the details of the poor Family Johnson. Unfortunately, the violent and absurd conclusion to the tale relates no profound moral or lesson. Maybe ‘don’t be an absolute idiot’?