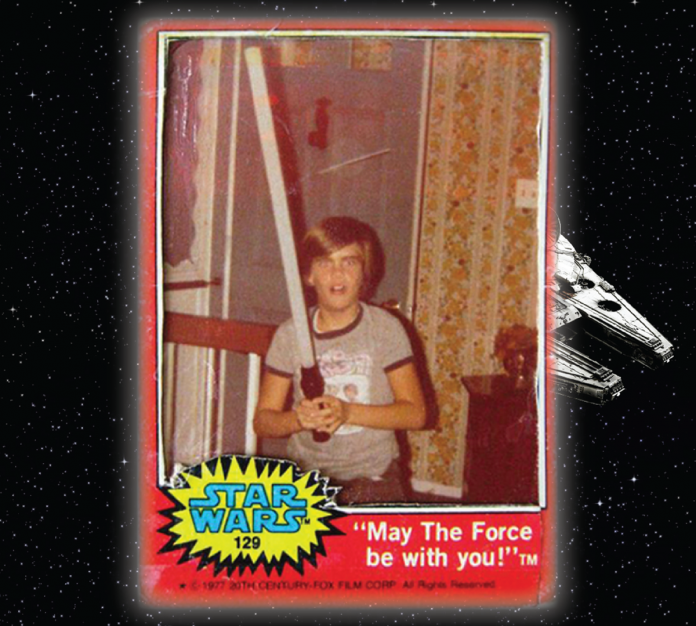 A series of personal anecdotes exploring the Dork Side

Episode I – A Bit Hopeless

(NOTE: after writing the bulk of this, I had to re-do the math. Was I really just eight years old when my friend and I went renegade on our bikes, riding a mile or two from home, crossing the highway to 7-11? Not only was the math correct, but the behavior was old hat for us at that age. It was a long time ago and attitudes were far, far different…) May 25, 1977. I wish I could claim to remember that day, but I don’t. I was eight years old and had just finished the third grade. My friends and I were preoccupied with the likes of stunt cyclist Evel Knievel, the rock band KISS, super heroes and even Star Trek. I still have fondness for the riches of pop culture properties designed to take our parents’ money.

Early that summer I saw a commercial for a brand new movie called Star Wars. It was a dazzling thirty seconds of colors and smoke. The movie’s popularity grew and I was exposed to more imagery that ‘wowed’ me. I had a Rolling Stone magazine with a Star Wars cover story. Although disappointed by a dismal review for the now-classic KISS album Love Gun, I was intrigued and puzzled by the Star Wars feature and photos that overtly piqued my imagination. I told my parents we HAD to see it! On other pages, meanwhile, photos of Dolly Parton also aroused my curiosity (a, um, inexplicable fascination). By the end of summer, I was the only kid on the street who hadn’t seen Star Wars. Finally in early September, our family made the overdue trip. Despite the fact that the movie had been out for four months, we still had a long wait in line (stupid seventies!). The film was thrilling, loud and bombastic. On the drive home, I squinted my eyes to bend the light of the headlights of passing cars until they resembled the diamond shapes of TIE Fighter wings. From the backseat, I zoomed along in my imaginary X-Wing.

A new era of mania had begun. But I had not yet known the power of the Dark Side… When Wonderbread ran a promotion that featured a free Star Wars trading card in each loaf of bread, my friend Steven Gibonni and I suddenly made a habit of hanging out in the bread aisles. I quickly became aware that I didn’t have the heart for the actual dirty work of our intent, undoing the twist tie and thrusting my grubby hand in against the bread. After an aborted attempt or two, I became lookout while my crime partner successfully pulled off a rapid succession of package heists. Soon, opened bags of Wonderbread drooped over the shelf and loose slices fell to the ground. Being a youthful criminal mastermind, I threw off any potential suspicion from my friend and I by dutifully informing a teen store clerk of these apparent thefts,

“Excuse me, sir, but I think some kids are stealing the Star Wars cards out of the Wonderbread”

Ha! The blame was now surely floated elsewhere as we exited the store with pockets full of cards.

You would think that a couple of geeks would be happy with such a score. But now we knew the Power of the Dark Side – we had to up our game. Our target: 7-11. Star Wars cards didn’t just come in Wonderbread, sports card company TOPPS released individual packs that contained 8 cards, a sticker and a piece of bubble gum. But there was a problem, unlike the boring baseball cards that were located discreetly in the candy aisle, the box of Star Wars cards was on the counter! This heist was going to require some balls.

Luckily my buddy had them.

There wasn’t much a lookout could do in this scenario; Steven would just have to move like The Flash when the cashier’s head was turned. I knew I could be of little help, so I offered to watch our bikes. I peeked in the store and watched a master at work. Steven casually walked around the large counter island, just like any grown-up customer going about his business would; browsing, picking up random items that caught his interest, visibly determining if there was something he should purchase that day. I could see his ingenious strategy – when he got to the box of Star Wars cards it wouldn’t look at all odd if he were to pick up a pack or two to inspect them just as any adult who was pondering a purchase.

Our bikes were stealthily parked on the side of the building and I hid just beyond the window. Once he had those cards in hand, I literally couldn’t watch – I raced to my bike in case we needed to make a quick getaway.

I can’t describe the feeling of joy – no, VICTORY – when Steven emerged from the store unscathed and two Star Wars packs richer.

We sped our bikes into the woods across the street. He handed me the packs and I hastily opened the first one. I popped the gum in my mouth and shuffled through the tiny deck. They were blue-bordered Gold!

But nothing could prepare us for what would happen next.

I opened the second pack with equal enthusiasm when suddenly we let out a simultaneous horrified yell, flying back in terror as cards went flying.

There was a tiny dead SPIDER embedded in the stick of gum.

It took us a moment to collect ourselves and our stolen property. That was scary. We divvied up the cards evenly and proceeded to ride home. Was the dead bug a sign? Should we have heeded the bad omen it implied, maybe learned some sort of moral lesson?

Nope, we returned the next day. Would the Force be with us again? Steven was inside, I was out. It was the same store keeper, an overweight middle-aged man with Elvis hair and sideburns. As I peered, I could see Steven blend in effortlessly, just another inconspicuous patron. He held a package of Beef Jerky and put it down slowly as if to say, “Maybe next time”. The boy was a genius. He nonchalantly made his way to the Star Wars cards. I could read his expressions, “What’s this? Star Wars cards? Hmm, interesting…”

Oh, crap the cashier was looking over his shoulder. Maybe I could use the Force to distract him.

“You don’t need to look at him. He can go about his business. MOVE ALONG!”

Steven thought it was safe to pocket the packs, but the timing was wrong. He was caught. My heart exploded, I hopped on my bike and flew across the highway, narrowly missing cars. There, perched behind a tree, I spied upon the 7-11. Was it bad? Or could he walk out any second? I hoped for the latter and waited… “Please come out!” I prayed. Ten minutes passed. Holy shit, this isn’t good! I was literally trembling like I never had before. Dazed, I hopped on my bike and made for home.

I was never so rattled. Steven’s mother and mine were best friends! If the store personnel were going to call the cops or Steven’s parents, my own parents would almost certainly receive a call. I’ll never forget that day, consumed with anxiety – scared as hell of being caught and punished. I recall lying on the couch looking at a TV guide trying to act normal while my heart raced, and waiting… waiting for the phone to ring, praying that it wouldn’t.

But it did. It was Steven’s mom, Peggy. I was to be held responsible for my part in the Great Star Wars Card Caper. I must’ve shut out much of what happened next, because I really don’t remember. All I know was that Halloween was just a week away.

When Steven and I regrouped in school the following morning, we learned each other’s fates – neither were going to be dressing up that year. Can you imagine being grounded on Halloween when you are eight? It was nearly a fate worse than death! I thought perhaps my parents were bluffing, but as the day drew closer and finally arrived, and I had not been bought or made a costume, I knew it was for real. I think I had almost accepted it.

Children started trick-or-treating to our door, when my mom suddenly said to me, “you can go”. YES! But what of a costume?! Luckily there was a popular celebrity that anyone could mimic in a heartbeat; “The Unknown Comic” wore a paper bag over his head. In ten seconds, I was the Unknown Comic. And I fled into the night. Years later, social media made it possible for me to reconnect with my old friend, Steven. We hadn’t spoken since we were fifteen. Although he was doing ok for himself and made a living as an electrician, I was disappointed to learn that he could never visit me here in California because of warrants open for his arrest. He assures me Lucasfilm has nothing to do with them!

And there you have it, a true tale of seventies kids so caught up in the hysteria of Star Wars, they actually broke the law. But the madness didn’t end there…

If you liked this, you will LOVE “Pod Stallions”, a podcast dedicated to growing up sci-fi in the 70’s & 80’s. Find them on Facebook or at podstallions.com