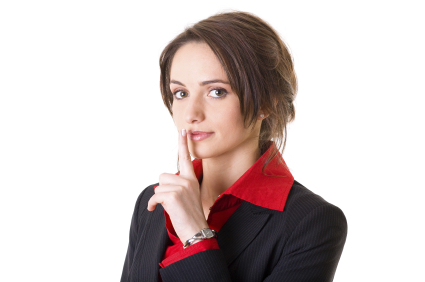 You could have the gift of gab, or you could be painfully shy. Typically, it’s the former trait considered to be of advantage. But that’s not necessarily the truth. We all know people who talk too much. It’s all about perception. The strong silent type appears to have a certain dignity, but what if in fact, he stutters? There’s nothing wrong with that, but his choice to remain silent works to his benefit. The less one says, the less likely they are to offend or make themselves vulnerable to criticism. In the workplace, it’s interesting to note that the mousy coworkers most don’t even know are there often have an edge over their loud counterparts. For instance, a salesperson doesn’t want to be rejected, but if he/she doesn’t chatter away and goes silent after the initial pitch, they’re more likely to solicit a positive response. Talking over someone will serve only to make you look like a nuisance that needs to be dismissed ASAP.

By remaining silent you’re allowing the other party to control the conversation, and everyone wants to be in control. In a sense you are ‘putting the ball in their court’. When they eventually grow silent there will be an uncomfortable lull from which they will actually want you to speak. That’s when you make your words count. It’s all a big strategy.

You can hate your coworkers all you want, or have no problem with them whatsoever, but remaining mute for the majority of a workday will actually make your team stronger. This can be tough to do, especially if you tend to understand matters quicker than those you work with. Avoid the temptation to speak up prematurely. Let everyone digest current business at their pace. You’re giving them the chance to come up with their own ideas for solutions and proposals. You don’t always have to be the “one-upper”.

You may even draw more attention to yourself by staying silent. When you’re the only silent party at a meeting, someone will call you out for your opinion. Since you’ve been silent all along those present will be that more interested in hearing what you have to say, subsequently making your words a bit more profound.

Sure, you’re self-assured and confident that your ideas are really quite strong, but sitting a few out and letting others take the spotlight increases your credibility. After all, if you dominate every meeting, you’re more likely to be met with rolling eyes – they’re sick of hearing your voice! If you are in the unenviable position of having to make a speech, silence can work for you with that, too (yes, really)! Engage your audience and make your words sink in by implementing silent pauses. In the best scenario they’ll be hanging on your words. Pause after the first few seconds of a speech, to show that you acknowledge your audience and you do not take their presence lightly. When you want to make an important point, pause a little longer after stating it. Using these strategic pauses will separate you from generic speakers who run-on and forget to breathe.

Being silent in regards to your personal secrets will also benefit you. Your dreams and goals should be held dearly. They lose their relevance the more you publicly share them. People who keep their dreams to themselves are more likely to succeed in their fantasy field. Simply talking about our endeavors tricks the brain into thinking we’ve already tackled them, and as a result we may give up prematurely. The same philosophy can be applied to diets, or term papers, or that fixer-upper you’ve been meaning to get to. Keep the goals private and you’ll maintain a greater sense of urgency in completing them.

And when it comes to debates, less is often more. Again, use silence as strategy. Instead of rushing to prove someone wrong, simply listen to what they’re saying. Find middle ground and agree. Now neither of you is on the defensive and you can proceed to tear his argument apart, calmly. But by aligning yourself with the opponent, you’ve made them feel like a contributor, not a arguer, in the conversation. No pun intended, like anything else, speaking is best in moderation!