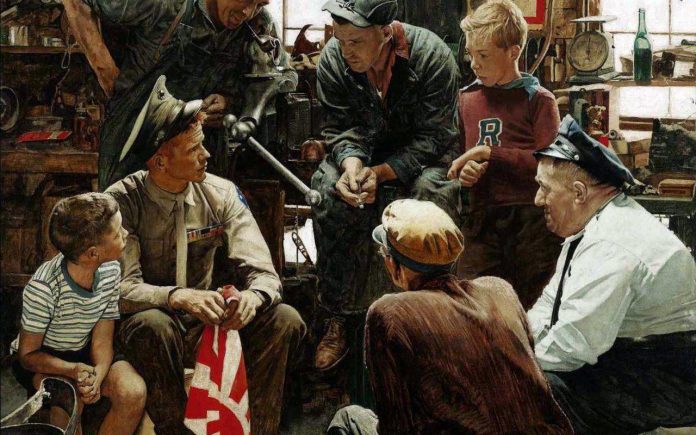 Today the work of illustrator Norman Rockwell is considered an integral part of idealised Americana. He lived through several artistic movements, including Impressionism, Cubism, Surrealism, and Abstract Expressionism, but by choosing to become an illustrator, he was 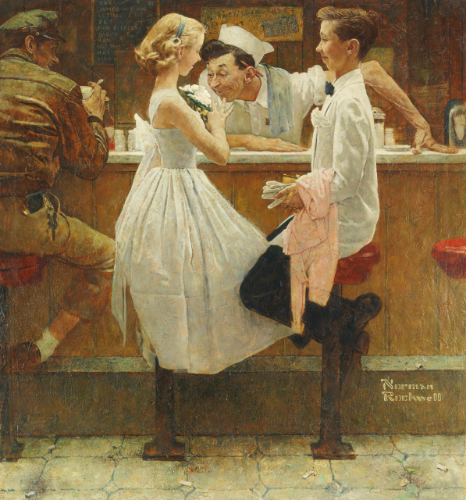 able to make his paintings ubiquitous in America. Rockwell is credited with more than 800 magazine covers, and through his art, he was able to forge a national identity for the United States. This earned him the place as America’s preeminent illustrator.

As the theory of visual culture has grown, the rejection of popular drawings and paintings as art has been contained to a historical moment that is now in the past. Today, that historical moment can be seen as a period when art was more concerned with philosophy than pragmatic craftsmanship. Because illustration was made for utilitarian purposes, it was not appreciated or acknowledged for its artistic value. This has changed in recent years. Currently, there is a wave of renewed demand for Rockwell’s unique works, and this is reflected by the strong prices his paintings have sold for. Major auction houses produced their spring sales of American art around Rockwell paintings. “After the Prom” was sold at Sotheby’s for $9.1 million, and “The Rookie” (pictured below) was sold at Christie’s for $22.5 million.

Of Rockwell, it is said that his greatest sin as an artist was to produce an art of unending cliche. However, underneath the cheesy and innocent surface, lies a more serious reality. In his work, Rockwell attempts to invert commonly-held beliefs of serious adults and pure children. This is best depicted in his scenes of kids discovering the falsity of Santa, which communicate a sense of disillusionment. In paintings like The Discovery and Santa’s Surprise, Rockwell offers the viewer a look at the emotional reactions of adults and children when discovering truth. He inverts their roles: adults panic like children and children see the truth in a positive, mature light.

The Discovery shows a young boy demythologising Santa Claus. It shows the boys emergence into the world of adult reality, and such a powerful personal event elicits an equally strong reaction in the viewer or father. In the painting, a boy finds Santa’s suit. There is a string hanging from one of the cabinets, possibly representing the unwrapping of gifts, and mothballs are scattered over the floor like snowflakes while the father’s pipe lies on top of the dresser. 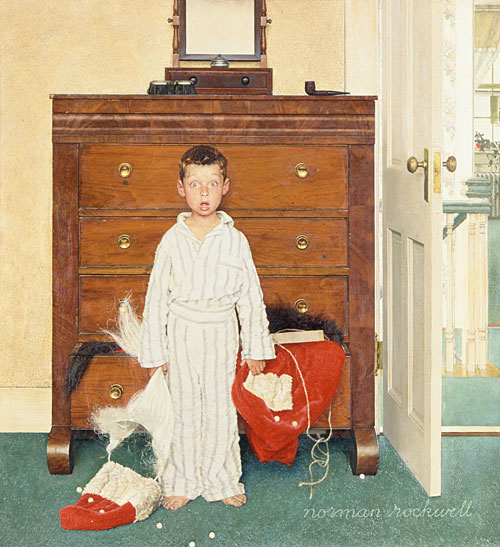 It is not difficult to see the parodic inversion of Christmas in this work. The real gift here being the present of maturity and knowledge of the seriousness of adulthood. In the doorway, we are able to see both the artificial flowers of the wallpaper and a real plant. This helps emphasize the effect of revealing reality to the world. Material and artificial culture are substituted by story, which is the the natural and organic rhythm of life. Christmas can also be about “real people, life and personal growth.”

The boy’s exaggerated shock communicate his sense of “betrayal and sadness,” and this makes the viewer uncomfortable to the point of exhaustion. Both the viewer and father, to which his look is directed, end up with a sense of trauma. The antisymmetric framing of the scene adds to the internal sense of chaos.

The mirror that is placed at the top of the drawer reflects only the wall’s reflection. The absence of the parent in the mirror helps show that his status as a role-model and authority-figure is in question. It also shows the father’s worry and desire to not be present in this awkward exchange. Despite this, the parent must engage with the child to regain control and power.

Rockwell impressed the collective consciousness of America through his steadfast attachment to old value during a time of rapid technological and societal change. According to the Saturday Evening Post, the studio where Norman Rockwell worked in old Stockbridge, Massachusetts resembles the Shaker aesthetic. It is very spare. Rockwell was known to be very neat, and he cleaned up several times a day. There was no clutter in his studio or his consciousness, and the ability to express these values in the events and circumstances of the modern world made him a good artist for the advertising industry. His popular appeal endures to this day.