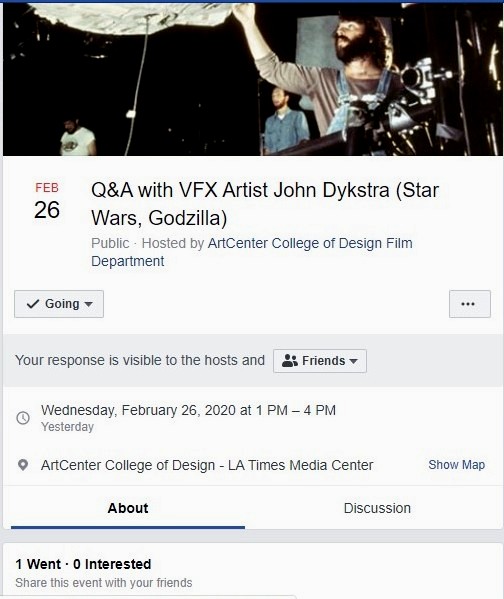 Was I going to have Academy Award-winning special effects veteran John Dykstra all to myself? When I left for the LA Times Media Center in Pasadena yesterday morning I was still the only one confirmed as ‘Going’ on the Facebook Event page that promoted his QNA appearance. Imagining an unappreciated John Dykstra and empty seats, I ‘Shared’ the info twice.

Nestled in the Art Center College of Design and Film campus, the location is notably obscure, at the end of a long two lane-only road that winds through upscale residential areas secluded by well-kept thick foliage. I imagined messes of traffic in times other than my noon-ish arrival.

I enjoyed some impromptu Cardio with a roundabout quest before settling in a front row seat in the small theater, empty at 12:30. An alumnus arrived, and we made friendly small talk about film. The next entrant was antsy and muttering, clad in shorts and flip-flops. I didn’t know what to expect from him, but I knew to expect something.

About five minutes to one, students flooded in. This was an actual class. Thanks to the organizer for the public inclusion! There was no introduction to the moderator, who resembled a modest Liberace and proved well-versed in film. Excited applause greeted John and the affair kicked off
with the opening scene of Star Wars. Projected ahead was the special effect that rocked the world – the underbelly of the Star Destroyer that seems to pass indefinitely. “I think most of us grew up with that in our childhoods, John” the moderator began. Let me mention here, I’ll be paraphrasing quotes. I didn’t want to violate etiquette and I saw no phones out. At one point John was encouraged to “say whatever you want, no one is recording here” so that may have been the policy. I obliged.

John’s admission that the model used in the iconic scene was only three feet long met with some surprise. Of course, I (the cool guy) already knew that. He explained the shot employed early Motion Control, but corrected to say it was actually “Digital Control”. He recalled how they (George Lucas and Gary Kurtz) came to him with the outrageous idea for the effect and his
naïve response of “Sure! We can to that!” then admitting, “I didn’t know HOW we were going to do it!” At this point, I wanted to speak out and emphasize the profound importance of the final result – how if that scene didn’t work, we wouldn’t be sitting here. But no one likes ‘that guy’ and I behave.

Excellent queries led the conversation. John originally aspired to be a Rock photographer. That interest in film and composition coupled with previous experience building models led him to assist his soon-to-be mentor Douglas Trumbull, on the 1976 film Silent Running. Again, I wanted to interrupt and explain how this related to my earlier point: despite the beautiful artistry of
Silent Running, the spaceship effects were not convincing. If Star Wars was produced similarly… you get the idea.

Other clips and related anecdotes for Star Trek TMP and Batman Forever followed. He explained how things taken for granted by today’s technology were achieved one small success at a time. Solutions had to be quickly improvised, such as for a flawed Batman effect when simply changing the setting from day to night made it work.

John was relaxed, cordial and invested throughout. He no longer resembles the rugged Grizzly Adams type I remembered. With a shorter-cut beard, in the light of the auditorium, he instead reminded me of John Carpenter. Perhaps not unlike Carpenter, Dykstra built a career out of an infectious ‘just go for it’ attitude. Despite all of his experience, he will still fly from the seat of his pants for a gig, doing almost anything to get the shot (like flying dangerously close to the surface of the ocean at high speed in a pre-drone era). He spoke of how Quentin Tarantino prefers shots to be composed organically. Referring to the famous sequence from Inglorious Bastards, during which Nazis are trapped in a movie theater as the screen is set ablaze, John had to assure Quentin, “We can do this with as little CGI as possible” Save for a few added optical elements, the raging fire was real, so hot that the first few rows of ‘movie-goers’ were actually stunt people caked in fire-retardant gel.

When speaking of working on Star Wars at ILM he recalled how they had to pool resources from the most random, far-flung places. They worked around the clock in the Van Nuys warehouse. Instead of dividing the day into two twelve-hour shifts that he says “would have killed us” he concocted a three-shift rotation that “drove us crazy instead!” They created a
makeshift hot tub and ‘slip and slide’ to help ease the tensions of a tightening schedule. I had an opportunity to elaborate when questions were taken, and mentioned additional context of the water shenanigans; the ILM crew was suffering in the summer heat in a building that had no air conditioning. “That’s true” John granted, “but we would have had a hot tub anyway!” I laughed and continued: “Was it ever like that again? Working in such an informal environment with such camaraderie and fun?” I likely related his ILM experience to my own exposure to that timeline through books and magazines as a carefree child. “No” he confirmed “It was never like that again. It was a unique experience” His next remark, though almost offhand, had an impact on me: “But I don’t use it as a benchmark. I don’t compare. There have been plenty of other great experiences too.”

It’s a common trait of my generation to embrace our childhoods. This event was important to me, having known of this man for 43 years. Now, in my custom Ralph McQuarrie pre-production art T-Shirt, with a bag of memorabilia I hoped to get signed, I thought twice about attachments to the past. John Dykstra had moved on, and he’s pretty cool.

Fidgety throughout, the fellow with the flip flops also posed a query. His tone surprised me; eloquent and well-spoken, he delivered a long-winded question straight from left field, something like “with all of your experience and knowledge and gadgets couldn’t you do something to help save the planet and stop Climate Change?” he even cited studies and techniques. John responded amusingly “I think the guys working on that are a lot smarter than I am! But if I can help, they can have my ‘gadgets’!” The same inquirer asked a follow-up, philosophical and over MY head, yet John indulged him in-depth, adding another dimension to his character. I wondered if it was a hippie thing.

Naturally, a couple of the students didn’t share the thrill of the event. When the projectionist was directed to play a clip from Kong: Skull Island, he asked, “Which one? There’s ‘Kong short clip’ and ‘Kong long clip’” a student blurted out “SHORT clip!” To be fair, the QNA clocked in at nearly two-and-a-half hours. When the final applause came, John sprang from his chair. I’m sure he and many of us needed to pee by then, but I called out, “John? Would you mind signing…?” He kindly capitulated, “Sure.” I sensed reluctance and I sympathized as a small crowd now circled him. Like me, they hoped to seize this likely once-only moment. He signed three items of mine and as at least two others were talking at him, I said “I’d like you to have this, it’s my Rock tribute to Old Hollywood” and handed him a Vintage Quixotic CD. “Cool,” he said. Typically, upon hearing the concept, folks accept it just to hear how bad it is. Then I saw a flash of that no-nonsense spirit that I somehow associated with John Dykstra. A young student
intent on networking identified himself in his industry-related capacity and asked, “…so do you have contact information?” “No.” John firmly replied, “I don’t. Sorry.”

My apologies to those hoping to read more about possible technical revelations John may have detailed. My scope is specific and I was surprised to be the only real Star Wars geek present. But it became clear that John wasn’t a man JUST about Star Wars – he also did Battlestar
Galactica and Star Trek! Okay, BESIDES the iconic visuals that fueled the imagination of my youth is a wildly prolific career, and it was gratifying to discover an unpretentious, likable dude behind it all. 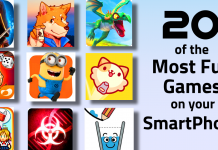 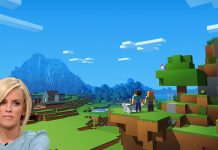